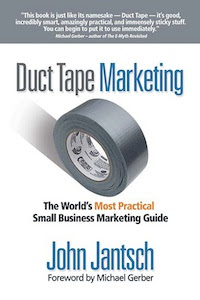 "the one place I turn to keep myself rooted in how the world thinks and buys, you know, marketing research, is PEOPLE magazine." - John Jantsch (Duct Tape Marketing)

Interesting. I was taking a gander at the book Duct Tape Marketing, and this advice about People magazine was kind of unique.

After all, often, we are what we read, and so as someone who helps run a company, writes software, does customer support, does marketing, writes more software, etc. I'm constantly reading the likes of Hacker News, Wired, Reddit, technology and marketing blogs.

But I'd probably bet a good majority of customers of popular software on the web (like say Basecamp) haven't even heard of Hacker News. But I bet they've at least skimmed a People magazine more than once. 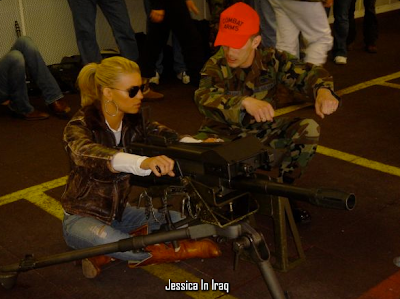 "My teeth are so white and I don't like them to feel too slippery, but I do use Listerine and I do floss everyday. But I don’t brush them everyday. I’ll use a shirt or something ... I know it's gross, but I always have fresh breath." - Jessica Simpson on Ellen Degeneres

So I thought I'd take John's advice and buy my first People and give it a look and write down any observations. They don't all probably have any kind of application to what I want to do, but they do spark some ideas.

1) First of all, I was embarrassed to buy this magazine at the 7-11. Rolled it up immediately under my arm after leaving the store. :)

2) Before even buying the magazine I ran a tool called Term Extractor from SEOMoz (a search engine marketing company) over the People.com website to see what kinds of terms stood out. 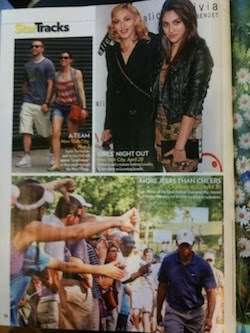 I know People is half celebrity gawking, but I was still surprised at how much larger and more promninent pictures are to text in this magazine. A bunch of the text is even tough to read against the photos.

There was even a section I saw that had Jessica Simpson's face next to it, but had nothing to do with Jessica Simpson. It was a little blurb about the games section of People.com. Makes you think you could/should spend a lot more time picking images/photos for a website rather than the text describing what your product does.

4) The magazine has an incredible amount of ads about food. Why this surprised me was because the magazine is a lot about pictures of people that look a lot hungrier than me. If you were to tear out all the pages without ads, you'd swear this was some kind of Food Network magazine. And not just healthy food so you can look like the celebs. A lot of chocolate, ice cream and even cream cheese.

There's even an ad for a Google Android phone and the copy of the ad is "Locate stars, planets or a decent taco".

Still a fair share of calorie cutting food. All with enormous pics again. And when the ads aren't about "people food", they are about pet food.

Does looking at skinny celebs make us hungry and easily persuaded to eat something?

5) The strong correlation to food remains with the two books that are featured in the magazine's ads. But not like you think. They aren't cookbooks. But the very first book advertised has a headline of a testimonial with one word: "Delicious". And the title of the other one is "Women Food and God". 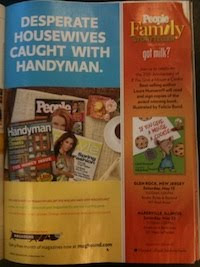 6) The Sandra Bullock news is probably obvious. People magazine and the rest of the world is obsessed about celebrity infidelity. There's even an ad for something called Maghound that takes advantage of this with a headline "Desperate Housewives Caught With Handyman". And the ad features two of the "Desperate Housewives" characters on the covers of different magazines laying on a table with Handyman magazine.

There's also a strange contrast with the other ad on this page for children's book. Weird.

7) Another ad tries to tap into the magazine's obsession with movies by making the ad look like a typical movie poster advertisement. It was for kitty litter :) 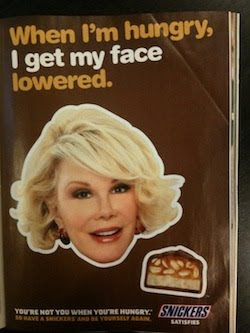 8) Not even sure what to say about this Snicker's ad. Kind of clever. Sort of a fake celebrity endorsement. Snicker's is the best selling chocolate bar by the way with annual global sales of $2 billion.

9) An article that caught my eye is about a cat that has 1.5 million Twitter followers! That's 3 times as many as Tom Cruise.

10) Another article profiles 3 "Extreme Job Hunters". All 3 are doing some pretty atypical things to find jobs. Lawson Clarke really stands out. He created a pretty crazy portfolio site, with the homepage inspired by a centerfold of Burt Reynolds in a 1972 Cosmopolitan magazine. 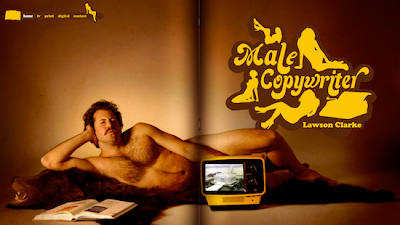 So regardless of your opinion of the content of People magazine, there's a whole lot of folks, many of whom you know, work with, sell to, etc, that are reading things like this. Keeping an eye on People just might generate some ideas on how to create products, advertising and writing in a language or style your users are likely very comfortable with.
Posted by nate at 10:07