The Ruby on Rails website received a refresh recently which includes the page on applications currently using Rails.  We are very honored to get a mention.
Rails has been a major ingredient to our success.  I'd almost like our use of Rails kept quiet, but when all your developer job postings have "RoR" in them, it's not a very good secret.  :)
We've been very lucky to be able to borrow from a wealth of talented developers, documentation, innovative open source projects, etc. Of course other languages have tremendous communities too, but Rails really fits us well. Rails and Ruby have gone a long way in helping us try to create simple, fast, and stable solutions to our customers' needs.
And of course as Rails evolves, they help us evolve. We've got some really cool stuff coming in 2009 that is made so much easier to get done because of this framework.
Hope everyone has a wonderful holiday and Happy New Year!
Posted by nate at 11:17 No comments:

This weekend we turned on the ability to publish your discussion board comments to your Facebook Connect feed.

A huge thanks goes out to Javan for getting the bulk of our Facebook Connect work done. Facebook is a wonderful piece of engineering and design.  Sometimes their documentation however on things like Connect can be a bit daunting.  Perhaps it's the wiki style approach, but Javan was able to make sense of it and got us rolling.
Posted by nate at 10:52 No comments:

Single Sign On with SAML tested against Ping Federate

We just recently finished interoperability testing with Ping Identity's product Ping Federate and our SAML implementation is doing great.
Posted by nate at 10:48 No comments:

This is a teaser no more!  Today anyone who's a user on http://home.inklingmarkets.com can now connect Inkling to their Facebook account.
If you are logged into home.inklingmarkets.com, you can go to the settings link in the top left.  There you will find a "Connect to Facebook" button.  Clicking that will do it's magic.  After that whenever you trade you'll see an option to publish to Facebook if you want.  A popup of what you can publish to Facebook than shows up and you can choose if you want to publish a little one liner about your trade or more details about the market in general.
I hope you like it, it's been a lot of fun to use so far.  And we plan on adding more to it: to let people publish the new markets they create, comments they make, etc.  Please let us know how it works out for you.
Here's an example of some trades I made, that shows up on my Wall right now. 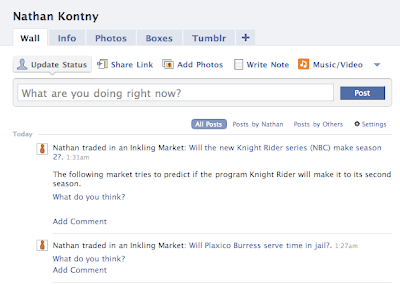 We've been working on quite an interesting and difficult project here at Inkling, single sign on using SAML 2.0.  We have been beta testing it with a client of ours using a Siteminder identity server and have been pleased so far with the results.
Here is a 30 second video of Inkling integrated with OpenSSO (Sun's open source identity server).  Please forgive the music; single sign on can be kind of boring to watch.  Also this was a big accomplishment for our development team, so it needed a bit of flare. :)
Please let us know if you also have a need for single sign on with SAML 2.0 soon and would like to start beta testing with it.
For any developers reading this, this work was powered by saml2ruby, which Todd Saxton and Pat Patterson contributed.  saml2ruby was created largely as a proof of concept, but over the last couple months, we've made improvements to it.  For example we fixed a security flaw it had, similar to the one Google had in their SAML 2.0 implementation in September of this year.  We also found the XML cannonicalization library used for this wasn't doing a good enough job to verify XML digital signatures properly for identity servers other than OpenSSO at the time.
The current plan we have with Pat's blessing is to move saml2ruby over to github, where hopefully it can get even more attention and love from the rubyists there.  We'll also provide our patches as well as soon share some lessons learned with this whole experience of SAML, service providers, identity servers, etc.
Posted by nate at 13:21 6 comments:

Getting Grilled by MBA Students

I had the pleasure today to present at Northwestern's Kellogg School of Management in Professor Marco Ottaviani's class on Strategy and Organization. Readers of our blog who are also hardcore prediction market aficionados may recognize Professor Ottaviani's name. He published, along with many other prominent economists, an article in the journal Science called "The Promise of Prediction Markets."

Speaking in his class I was once again reminded of a phenomena I often experience when presenting to MBA classes: questions overall are probing and insightful, but without fail the first question I always receive is about market manipulation, the possibility of collusion, or project managers hijacking their own projects to increase the value of their own long or short positions. I wonder why this is? Why are the initial questions not more positive? Do students automatically try to "go for the jugular" of their guest speaker? :)
Posted by Unknown at 19:18 2 comments: