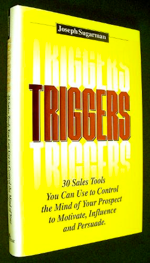 I've got a soft spot in my heart for psychological stuff. Especially the stuff that triggers us to do things. I'm not sure why. I think I just really like to understand my brain more, because it can be an awfully weird place.

How's this for weird?

I picked up a book again I hadn't read for a long time called Triggers by Joseph Sugarman. I hear he was the guy that came up with the advertising selling those Blublocker sunglasses, and it sounds like they sold an insane amount of them. I even remember buying a pair :)

There's a trigger in there that I remember using a couple times at my old job. Well it was specifically to help this girl Stephanie save a little money at lunch.

So we tried a technique that I had learned in Triggers.

In Triggers, Joe explains a very similar situation where he is trying to order ice cream. He asks the waitress for chocolate ice cream with whipped cream. The waitress translated that for herself and for him and said "well, that's a sundae without the syrup, which is extra". Joe would get frustrated and begrudgingly pay the extra.

But one day Joe decided to not order the whipped cream to save a little money. However, as she was leaving with his order he gave into his whipped cream addiction, and asked her as she was walking away if she could add whipped cream. This time he was only charged for just the ice cream. Not the extra amount of a sundae.

Sure enough, Joe was charged for a sundae, and the friend was only charged for chocolate ice cream.

We felt that Stephanie was stuck in a weird situation because we knew that this veggie sub was just the Special without the meat. Why should the veggie cost more?

I noticed Stephanie was doing something similar to Joe. She'd go up to the order counter and say "veggie sub please".

So one day I had Stephanie ask for the Special. But as they were about to make the sub, she just asked as an afterthought "Can you hold the meat please?". And they gladly did it every time.

In commerce this is the psychology used to get people to keep adding upgrades onto their orders. You get someone to commit to an initial purchase at a simple/cheaper price, and then you ask them if they want more. It's easier now to get them to say yes.

This is what GoDaddy does in spades. Love or hate GoDaddy, they are kicking ass at it.

Harper Reed, the previous CTO of Threadless, was telling me about buying the magicJack. Here's an awesome photo of Harper and the mayor of Chicago that I thoroughly enjoy.

The magicJack is that phone device on the informercial that's a way to make calls using your computer and current phones. It's pretty cheap. But at the end of buying the thing, Harper was surprised at all the add ons he'd added to his cart and gladly paid for.

Use this knowledge as you see fit. It obviously can help some marketing and sales campaigns make more money. It also can help you understand how you're manipulated a little bit to buy more stuff.

And it might even save you a couple bucks at a sandwich shop.
Posted by nate at 09:51