After graduating from Y Combinator’s second ever batch in the winter of 2006, then operating for close to 10 years, I have formed a new company with a new co-founder, Ben Roesch. That new company has acquired Inkling and all its assets, and we will be operating under a new name: Cultivate Labs.

We have defined Cultivate’s new mission as improving how organizations work by using crowdsourcing to leverage the untapped knowledge, experience, and wisdom of their people to improve the decisions and judgments they're making every day.

All of our current clients have been notified of this change and we are very excited for what is ahead, including an entirely rebuilt forecasting platform we will be rolling out over the next few months, new partnerships, a new crowdsourcing product to help companies prioritize new ideas using crowdfunding, and an expanded, highly talented team.

Here is our new website and Twitter account:
On a personal note, I wanted to thank all our current and former clients who have worked with us over the years. Prediction markets have been a new approach to forecasting at every single company we've worked with, and it was always a risk for someone to try this out. Whether the project ultimately succeeded or failed, someone had to take the chance to try something new in their organization, and for that I was always very thankful.

I also want to thank all the users of our public market at http://home.inklingmarkets.com. We’ll soon be announcing its future, but there are a hardcore group of people on that site who have been using it for years, spending hundreds, if not thousands of hours making thousands and thousands of forecasts. That site is one of the longest running collaborative forecasting exercises ever, and it’s thanks to users like wstritt, job, chelseaboys, mfwinalford, SneakyPete, and others that it has continued to thrive.

Finally, I wanted to say something about Nate Kontny, my co-founder at Inkling. Nate approached me in 2005 about starting this company while I was working at Accenture and he was at Digital River. We went on this crazy journey together until he left in 2011 to work on some new things.

During that time we became close friends. It’s like everyone says - you’re married to your co-founder. In 2012 Nate joined the fabled Obama election technology team and soon thereafter built the successful writing tool Draft, ultimately landing at Highrise as the new CEO after 37Signals spun it out.

As these things go, Nate and I don’t talk anymore, and I miss that. I always learned something when I spent time with him, and laughed a lot too. I think the timing was right for us to part ways back in 2011, but that doesn’t lessen the fondness I’ll always have for working with him for 5 years and the respect I have for his talents as a programmer, writer, and entrepreneur. He’s one of the smartest, most creative, productive, and honest people I know. I’m a better person today having worked side by side with him on Inkling.

Someone asked me the other day what my favorite memories were of running Inkling. I have many, but I’ll share 2 early ones now.

First was the journey of getting in to Y Combinator at the inception of our company. Nate and I travelled to Cambridge, MA to meet with Paul, Jessica, Trevor, and Robert. Y Combinator was still in its infancy and had only done one other “batch.” Our batch was going to be the first one they had done in California. The 20 minute interview seemed to hinge not on anything related to our idea, but on Nate’s chops as a developer, and the design of a logo on a political blog I had been writing called “Outrage of the Day.” We walked out dazed and wondering if we were even making the right move trying to do this. Who the hell were these people who didn’t even care about our business idea?

The rest of the day we wandered around Harvard and even went to see a movie. We were walking around some random neighborhood in Cambridge when we finally got the call. They wanted us. We had just a few minutes to call them back or the offer would be off. We took it. 18k investment. The next day we came home to Chicago, quit our corporate jobs, and 2 months later we were living in a rented house in Cupertino building our product, Inkling Markets. 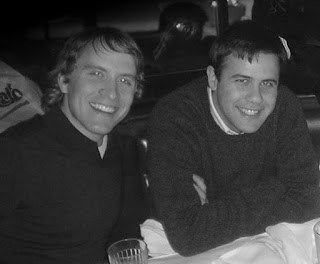 Celebrating quitting our job at Dublins Bar in Chicago in 2005.

Another favorite memory was the night we launched a branded prediction market for CNN for the 2008 elections. At the time we had our own dedicated hardware at a datacenter and we had spent weeks white labeling our site and optimizing as much as we could in preparation for 100x the number of people who had ever used Inkling before.

CNN wasn’t great at communicating with us, and without warning, they put a link to the prediction market right on the front page of the election site. Suddenly it was like a fire hose had been turned on and we were getting crushed with sign ups and trading activity. It was still just me and Nate in the company at the time, so dealing with whatever happened was on us, exclusively.

Amazingly things seemed to be going fairly smoothly until I got an email from my Dad late in the evening. Apparently he was repeatedly getting email alerts from our site for the exact same event. 13 so far, within an hour. It turned out there was a bug in our mail queue that only appeared under this level of duress. I’ll never forget the chat sessions I had with Nate as he was doing play by play of trying to both fix the bug and prevent even more repeat emails from going out by directly deleting thousands of records in the database representing queued mails that were supposed to go out.

At around 2am I wrote to our contact at CNN to let them know what happened, thinking we were surely going to get canned after this, but fortunately they couldn’t care less. What are a few thousand pissed off people in the grand scheme of things when you’re (at the time) one of the top 10 most visited web sites on the Internet? We even got a commercial made about the prediction market featuring Wolf Blitzer: “Good luck kicking some assets!”