Picasso was a failure 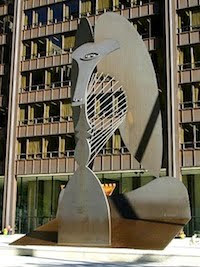 photo by: J. Crocker
How many works did Picasso create in his lifetime?

How many works of Picasso's could you name or describe?

Looking at those kinds of numbers, you might think Picasso was a failure.

But you know better.

It takes a lot of work. A lot of practice to become a master. Picasso just kept making shit. It sounds like much of Picasso's early work was even set on fire by the guy himself to keep his apartment warm because he was broke. We don't even know the totality of what he created.

Another example of a company who's constantly failing is 37signals. They don't talk about it all the time, but they keep failing. You might think they are doing gangbusters with their very popular book Rework out there on bestseller lists, Jason Fried writing an article in Inc magazine each month, or their products making millions.

But they keep failing.

Listen to their latest podcast.

"We tried out these ideas in public, we tried them out on the blog, and we took the ones that were the best...The shit that nobody cared about, or we didn't care about anymore or that bombed out is not going to make it in."

-David at 37signals (in the first few minutes)

More failures of 37signals? Highrise version 1. You didn't even get to see it. They blew 3 months on it. Then they had to throw it out because they were on the wrong track. But then they created the Highrise you see today.

Remember the 37signal's Gig Board? Yeah, they have the Job Board. They used to have the Gig Board too. Doesn't exist anymore. I suspect because it wasn't doing what they first imagined it would do. Not enough gigs to have a separate place for them. So it got canned and now sort of rolls up into the Job Board.

On a similar note, Olivia Wilde of House fame had this to say about being more confident because you will get there:

I get asked a lot what motivates me. Practice. I'm going to fail at a lot of things. I'm going to keep trying to not let them fail of course, but they'll fail. I'll keep writing blog posts no one cares about. Making features that don't work out like I want them too. Trying new ways to grow our company that fails to reach a single person.

A bunch of them are going to bomb out. But a few won't.

A few might be remembered and make a big difference. A few already have, and for that I know the odds are high that if I keep going. If I keep practicing. If I keep working on being better than yesterday. I'll be able to make a few more works of art.
Posted by nate at 09:53