Defining success of a pilot

A couple weeks ago we ran a one-day workshop for a new client of ours that is about to begin a 6-month pilot for 250 employees.

A common exercise to conduct before embarking on any new project is deciding what the success factors will be. How will we know at the end of the project if we've been successful? What will our metrics be?

When it comes to prediction markets, one obvious success factor is how "accurate" the markets have been. And by accuracy we of course mean the prices of stocks matching the probability of events occurring over time (if markets are regularly saying a particular answer is going to happen 80% of the time, it should actually happen 80% of the time!)

But there are other factors we discussed that should also be used to judge the success of pilots. Among them:

Method has an interesting way to notifying users of their website potential bugs they may have encountered.
Hover over "Method is embarrassed"

and a popup notifies users what the problem is:

Refresh your positions on your own

The performance of your positions is cached.  The reason this needs to be done is because calculating the true value of each of your positions can take some computing horsepower.  Not a ton, but enough so that if you have a lot of positions, if it was calculated in real time, your dashboard page would take about 12 seconds to load each time.
We are trying to improve the experience of this area of our application so that even if it's cached, you won't find it frustratingly stale.  One of the UI elements we are experimenting with is giving you the ability to refresh the performance of whichever position you want, whenever you want.
When you login today, you'll see that on any of your positions on your dashboard you can hover over that row and then click the performance indicator (the up/down images) or the refresh link below it to get the cache refreshed with the real time performance.  For example:

There are many more improvements we have planned for the dashboard.  Stay tuned.  And have a very Happy Thanksgiving!
Posted by nate at 08:03 No comments:

From an article in the Sunday New York Times:

...Normally, a big bank would never allow the word of just one executive to carry so much weight. Instead, it would have its risk managers aggressively look over any shoulder and guard against trading or lending excesses.

But many Citigroup insiders say the bank’s risk managers never investigated deeply enough. Because of longstanding ties that clouded their judgment, the very people charged with overseeing deal makers eager to increase short-term earnings — and executives’ multimillion-dollar bonuses — failed to rein them in, these insiders say.

We talk a lot with our clients about using prediction markets as early warning indicators to simply begin asking more questions. Longstanding friendships and power centers in organizations are well entrenched and difficult to operate around. The signals from the markets, not only from the stock prices, but also from the data generated by trading, are a credible and efficient way to expose reality so ultimately the decisions made are what is right for the business, not just for the people involved.
Posted by Unknown at 11:55 No comments:

Your Inkling Dashboard Now Available as a Google Gadget

You can now add your Inkling Dashboard to your Google homepage. On your Dashboard look for the +Google icon. 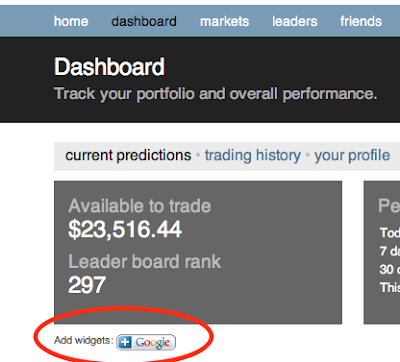 After adding it to your Google homepage you should see a minimal version of your Inkling Dashboard: 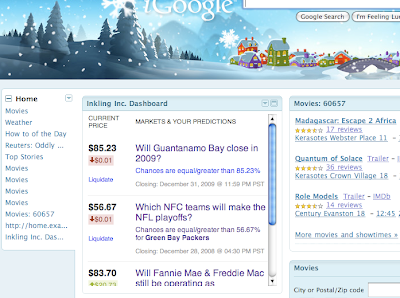 This feature is available on all the Inkling marketplaces so Google homepage users now have a way of keeping track of multiple memberships they have across the Inkling universe.
Posted by nate at 12:49 2 comments:

Seth Godin at Ted on some lessons on marketing. Was listening to it in the background, but perked my ears up when he mentioned that Silk (soy-milk) tripled their sales by putting a product like soy-milk in the refrigerated section at the grocery store when in fact, their soy-milk doesn't have to be refrigerated at all before it's opened. Seems obvious why, but it sounds like this was not obvious at the time.  The silk story is 15 minutes in.

Woah, has there been some crazy stuff going on over here.

There's been a lot of new projects going on here at Inkling and a major catalyst to all this momentum was Rails developer Javan Makhmali (http://javanmakhma.li/) joining our team recently.

Javan is a fantastic Rails developer and has a great eye for simplicity and intuitive design. He's worked on quite a few great projects and one that stood out because it was such a fun coincidence was http://noonebelongsheremorethanyou.com/. I forgot where I had originally found that site, maybe it was Seth Godin a year and a half ago. That was a seriously cool idea, and one that Javan kept running amongst some monstrous traffic when it spread like crazy.

You've been seeing his work all over Inkling Markets lately: the new digested market alerts, the hover menus on managing markets, faster cashouts of the really heavily traded markets, market refunds, and a ton of other things behind the scenes. He's also been cooking up some things that I need to keep a lid on for just a bit longer, but hopefully we can launch soon.

Anyways thanks a ton, Javan. Your work is greatly appreciated by our customers, our users and us.

As Inkling introduces prediction markets to more and more companies, we are beginning to notice some issues common to each industry. This is the first of a series of postings that will discuss how Inkling is being used to address some of these issues. The first example I want to share in detail is in the life sciences industry.

Alongside these macro trends is a great amount of uncertainty:

Knowing how uncertain the future is, how do life science companies create strategies for growth while at the same time, avoiding the paths with pitfalls that can negatively impact their business?

Prediction markets are an excellent way to assess and evaluate the risks that life science companies face.

For example, a pharmaceutical company is currently developing several new molecules many of which have promise. In particular, the company has developed a new compound that treats a major neurological disease. The company knows that its competitors have other products that are further along in the clinical development process. But the company does not think the competing products are as effective as its molecule. To further complicate the picture, recently a new device was approved by the FDA which treats the disease in a completely different manner. However, before most insurance companies will pay for the device, it needs to be approved for reimbursement by Medicare.

Based on the competitive environment, the company faces a key question: Does it spend its resources on the molecule for the neurological disease or, would it be better positioned if it developed one of its other drugs where it may face less competition but also a smaller potential market?

Using Inkling, the company asks several questions which try to better assess the competitive situation: Will a competitor's product be approved by the FDA before the end of the year? Will Medicare agree to cover the costs associated with the new device? If Medicare agrees to cover the device, what will the total out-of-pocket costs to patients be? Before the end of the year, will an international drug company license its product to a U.S. competitor to ultimately gain entry to U.S. market?

Questions that were largely answered by hunches and guesses can now have probability scenarios assigned to each of them.

As these markets are run, senior management now has much more context from which to make the decision regarding the future of their own molecule.
Posted by Heidi at 16:53 No comments:

Curious what the new administration will bring?

One of the great things about hosting a public prediction marketplace run by "the people" is the quick response to current events our traders have. With the results of the election now about 12 hours old, traders on our public marketplace have already submitted several markets about what the new Obama administration will be like. Among them:

Trade away!
Posted by Unknown at 11:09 No comments: