It's not a surprise, but forming an audience is a huge way in order to grow a business or career.

An audience chooses to be there because they are interested in what you have to say. They are there giving you permission to give them knowledge and help.

And for a business, they may even buy something you're selling to make their lives better.

One trouble though that plagues most people about the audience angle is they feel they have nothing to say.

I can't believe how many people I know who want to improve their business or careers but then get stuck finding an audience. And they're stuck because they feel like they don't possibly have anything to say and can't possibly help anyone more than someone else can.

"There's so many more people who know so much more than I do" is the popular lament.

Guess what. There will always be someone doing what you want to be doing better than you.

But that's not the point. The point is even a 3 year old can have an audience.

I was at a friend's birthday party the other night, and had a great conversation with another friend I hadn't seen in a while. He's been a newish dad with a 1 year old and 3 year old.

This guy was just gushing about his kids. Friggin loves them!

Because to this 1 year old he is.

To the 1 year old, here's a little person who's just a little bigger than him, totally kicking ass around this place. To the 1 year old, his brother is a king and has figured out how to conquer all these challenges in the 1 year old's path. He can walk, and make good use of communication. He's probably able to use a bathroom. :) And on and on in that list of accomplishments.

Why is this important? Because it should teach us, that we don't have to be Steve Jobs or Michael Jordan to teach people and find an audience.

There's something about us that we know more than a bunch of other people, and those people are probably looking for some help, and we are in a great place to do that. We can still relate to the people that need teaching.

The 1 year old doesn't look up to his dad like he looks up to his 3 year old brother, even though his dad could easily kick both their assess in a painting contest. 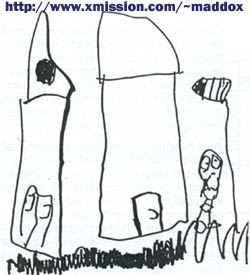 "I am better than your kids." If you've never seen this painting before, you're welcome. :)

He looks up to his brother because they can relate to each other.

If you're in a struggle to grow a business, think about this 3 year old.

You have a wealth of knowledge at your disposal. You have so much to teach people who want to follow in your footsteps and who'd look up to you.

You don't need to have enormous fame and accomplishments to be able to teach and form an audience. You don't even have to be that much further ahead than those that could use some help.

You just need to be able to help. Of course you should still be humble and recognize there is a lot you don't know.

But I guarantee someone could use your help today and would love to be your audience.
Posted by nate at 08:59