Treasure in my parents' basement 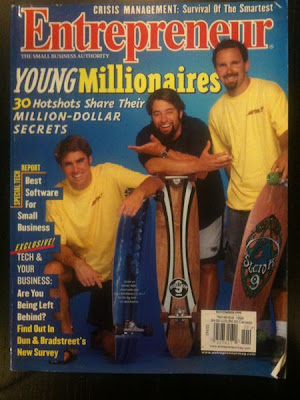 My parents are moving soon, and I helped a bit with packing and sorting through some of my old things in their basement last night.

I found some treasure.

The first thing that caught my attention was my very first Entrepreneur magazine.

I bought this thing on a flight to one of my first interviews for a full time job. :) Ahh the irony.

I remember sitting near a Chemical Engineering professor on the plane, and he spotted the magazine apparently. Because off the plane he was asking if I own a business.

Took awhile to get here from there, but some stuff finally clicked.

The world was a lot different in 1998 :) For the best software for small business: Windows 98, Word 97, Access 97, Netscape Communicator.

A few things that have some real practical value: books.

I've been reading and blogging a little about psychology and persuasion. And one of the books on my Amazon Wishlist is Influence by Robert Cialdini. Looks like my sister read this in college perhaps, because there it was on the bookshelf.

Looks like she also read Flow by Csikzentmihalya. Which is another book I see coming up a lot in discussions of lean startups.

And finally, a book that I remember influencing me a great deal in college Siddhartha by Hermann Hesse

"In the novel, Siddhartha, a young man, leaves his family for the contemplative life, then, restless, discards it for one of the flesh. He conceives a son, but bored and sickened by lust and greed, moves on again. Near despair, Siddhartha comes to a river where he hears a unique sound. This sound signals the true beginning of his life - the beginning of suffering, rejection, peaces and, finally, wisdom."