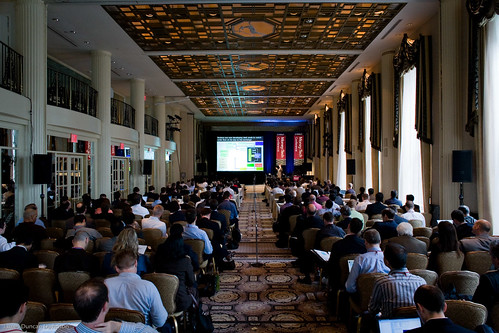 Earlier this week I had the opportunity to spend some time in New York City at the O'Reilly Money:Tech conference held at the Waldorf Astoria. This was the first time O'Reilly had ever put on a conference like this and I believe most people found it very worth their while.

I participated in a panel about prediction markets along with Justin Wolfers, a Wharton Professor and guest editorialist for the WSJ this election season, Alex Forshaw, a prolific trader on InTrade (and college senior surprisingly,) Jason Jones, a hedgefund manager, and Craig Kaplan from PredictWallStreet. Questions from the audience were fairly typical of the conventional wisdom critiques of prediction markets which the panel dealt with handily. It was especially good to finally meet Justin Wolfers since he has become somewhat of an unofficial spokesman for prediction markets in the mainstream media. We talked about working together on some things in the future which could be quite interesting.

Bo Cowgill from Google also gave a talk on his recently published paper (with Wolfers and Zitzowitz) and the more he is invited to give this talk, the better. There is a real lack of communication right now about the organizational impacts prediction markets have beyond more accurate forecasting and Bo's work is thankfully filling that gap.

Inkling also ran a marketplace in conjunction with the conference, asking a wide range of topics both financial and entertainment driven, which people seemed to enjoy.

And of course the benefit of speaking at a conference is getting to attend other sessions as well. Besides a few of the data analytics talks, I was most interested in the sessions on collaborative stock picking given our side-hobby efforts a year ago with a now defunct application called Worthio. It was liberating to see that similar applications had picked up traction, such as Motley Fool CAPS, Stockpickr, and PredictWallStreet. Another highlight of the conference was Tim O'Reilly's web 2.0 talk. I had heard it before but with a spin towards financial markets it gave some additional food for thought. Finally Jim Cramer starting the conference off in a fireside chat was a treat. About half way through he went in to full-on riff mode about a wide range of companies, even calling one of the platinum sponsors of the conference, Dow Jones (after they surely paid thousands of dollars for the honor,) "worthless." It was classic Cramer.
Posted by Unknown at 13:31

I really like your blog- have to check on it more often. If you are interested in
web-businesses maybe you should have a look at my blog :)