Getting inspiration from touring bands

In the last two weeks I've been fortunate enough to see two of my favorite bands live here in Chicago. These weren't well known bands, having what I can tell only a small but loyal following. And due to that, they didn't play at the larger venues like the Congress or Aragon Ballroom, but instead in one of Chicago's dozens of quaint, ~250 person venues.

Last night's concert was by a band called Horse Feathers who played at a bar called Schuba's. It was one of the best concerts I've seen in a long time. They played a rousing hour long set and before that, Caroline Smith and the Goodnight Sleeps (sans the Goodnight Sleeps) opened. 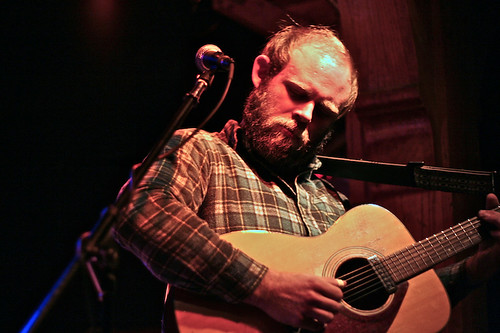 There are few experiences that match seeing a band who you are mildly obsessed about live and up close in a candle-lit intimate venue. I parked myself in the front row of a standing room only crowd and stayed there all night.

Why do I bring this up on our Inkling blog? While the music was great, what made the evening transition from special to inspiring was seeing the band themselves do all their own setup, their own tuning, everything. Before they played they just walked in from the bar through the crowd to the front of the stage. And outside wasn't a big bus with a cool graphic of a western sunset on the side, with equipment trucks trailing. There were no roadies, not even a band manager. Instead I spotted a cargo van outside with an Oregon license plate that the band drives themselves and their equipment around in.

The money they're making touring can't be great based on the ticket prices. Looking at their aggressive tour schedule they're driving several hours a day or night to make their next venue. They're away from their homes and families. But they're out there doing what they love.