We now have opinion polling

There's often situations where folks, including us, have wanted to run traditional polls gathering opinions alongside their prediction markets. Now you can.

Using the "ask a question" wizard, you'll see a checkbox

If you check that box while asking a question to your marketplace, Inkling will know to treat that question like a traditional poll.

The question wizard is also smart enough too to figure out if you are probably asking a poll versus a prediction market like question too. 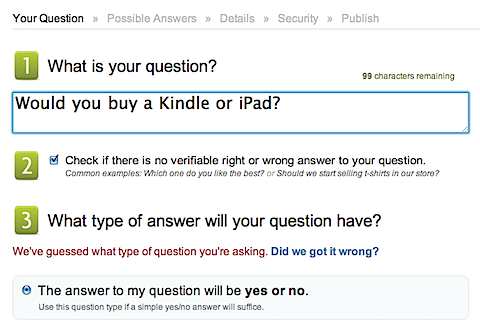 So you can still capture how strongly people feel about their poll choices.

Poll type questions don't cost any of your virtual currency to trade in. Instead users are rewarded for answering these types of questions with "karma". You can see how much karma you have on your dashboard.

We'll be doing a lot more with karma points soon, so stay tuned. If you want to try it out, you can share your opinion on the Kindle versus Apple's iPad debate here.
Posted by nate at 14:31