Yesterday in our hometown of Chicago was the annual Chicago Cares Serve-a-thon. Companies, schools, non-profits, church groups, and every other type of group you can think of put together teams to meet up at Grant Park in the morning, then take buses to area schools and playgrounds for a day of manual labor: painting, cleaning up playgrounds, doing some landscaping, etc.

Inkling put together a team and were assigned to the Piccolo school on the city's west side with about 50 other people. The school is named after Brian Piccolo, a back up running back for the Chicago Bears in the late sixties who died of cancer at 26. Piccolo was a great running back, breaking records while at Wake Forest, but he was always a back up while on the Bears, running behind the legendary hall-of-fame running back Gale Sayers. Brian's story was tragic but was made much more famous by the made for tv movie "Brian's Song."

At the school we collectively painted 4 classrooms and two long hallways. It looked pretty nice when we were done, thanks to the several volunteers guiding us through the day doing quality control. To top it off, someone figured out a way to play the radio over the school loudspeaker and tuned it to an eighties station. Manual labor is better when you're listening to "Don't You Forget About Me" by Simple Minds on the Breakfast Club soundtrack.

Here's a picture of Nate and myself at the end of the day waiting in the school lobby for the bus to take us back to Grant Park: 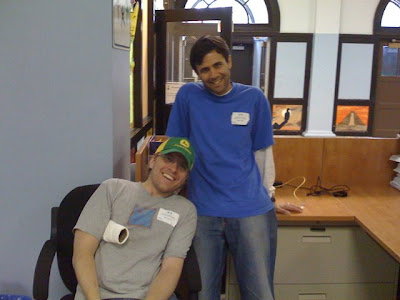