This weekend we rolled out a complete overhaul of our marketplace "New Market Alerts." Traditionally if you subscribed to them, you got an email each time new markets were created. These emails were very simple and told traders what the new questions were and included a link to the market. As Nate wrote about in his last post, these emails are critically important as they consistently drive new interest in the marketplace. But there were two problems with what we had: the emails become monotonous over time, and the only action you could take was to go to the market. So if you wanted to trade in a new market you needed to click on the link, login if you weren't already, then click a few more times to make a trade.

More importantly we've gotten feedback from several of our administrators that they would like to be as inclusive as possible of executives; that it's hard to get executives to try out new applications and what could we do to help get them more involved more often. We know that most executives are addicted to their Blackberries (crackberries?) and iPhones so what better way to try and get them involved than through these new market alerts.

So now, instead of just getting a link to the market, you actually get links to make trades directly from the email. And we've formatted the emails in such a way that they look and work great on mobile devices. 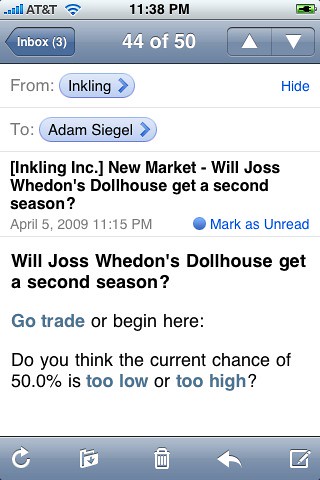 And when you click one of the trade links on an iPhone: 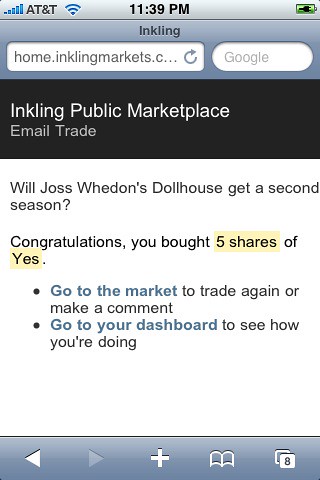 Now even if an executive doesn't want to become a "power user" they can very easily express their opinion every once in awhile right from their mobile devices. And for the rest of us who do trade casually or regularly, the process has become that much easier to express your opinion right away. Just one click!
Posted by Unknown at 23:19